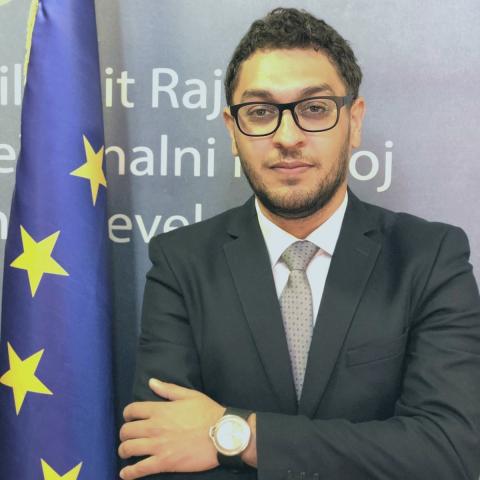 No sooner had Fridon taken office than a one-two punch of political uncertainty and the Covid-19 pandemic struck. It’s made for some challenging days. However, his time at CEU – including his Student Union presidency during the LexCEU crisis – prepared him well.

“Somehow, I think these things follow me,” he said.

An advocate for minority rights, Fridon seeks to empower marginalized Kosovans and stemming the unemployment rife among Kosovo’s marginalized groups and young people.

We caught up with him this Spring for some Q&A.

How does one go from CEU to elected office months later?

I was involved in politics before I left Kosovo. We had elections immediately after I returned, because the former prime minister resigned. Everything happened so fast. I ran for election, joined one of the parties. I helped them redesign the platform and the program. I became Deputy Chair of the party. After the election I was offered this position because of my prior experience and education.

Where does the New Democratic Initiative fit on the political spectrum?

Centrist. It’s a small party that mostly represents the vulnerable groups of Kosovo. It raises the voices of groups who are unheard in Kosovan society, minorities and other disadvantaged people.

While you were a CEU student, politics were in your mind?

In my second year at CEU I was the president of the Student Union. My presidency came at the most raucous time, because of [LexCEU]. We had a lot of political activity. It was a great preparation for politics.

You’re a freshman and a pandemic strikes. You must have some long days.

Yes. It’s something that follows me. Even during CEU. Immediatelyafter I became Student Union president the [Lex CEU] deadline came, and then the situation shifted and the protests happened. Now it’s the same, after I got my position we have the pandemic and other political issues.

What is your top priority?

I always wanted to change the mentality of the representation, especially in leadership positions, in creating space for new people to participate in political processes. When it comes to politics the doors for young people are always closed, because of the old elites who have been ruling for almost 20 years.

Do you have any designs beyond your current office?

I’m aiming to join parliament in the next elections.

How did CEU prepare you for your work?

CEU gave me this feeling that I should contribute. I ran for [student union] president because I thought I could do good things. Especially during LexCEU, I could see people who were doing PhDs and were stressed about everything but they still found time to go and protest and write and do all kinds of activism. I think that’s something unique that CEU gives to people: a feeling that you should contribute to the community to which you belong. And we had the feeling we belonged.

What do you miss about CEU?

A lot. I was there in January, and it’s like you feel you’re home, you know? I miss my peers. I miss this pressure. I miss this international community. I miss the spring classes. And the rooftop, of course.

This year is unlike any other. What would you say to students graduating this year?

I think it’s sad that they can’t go to the graduation ceremony. However, the CEU experience lasts a lifetime. That’s the unique thing about CEU: you can always go back.

What would you say to potential students?

CEU is a once-in-a-lifetime opportunity and they should take it.  As Student Union president I worked closely with the rector and the committee on CEU’s strategic plan. I can assure every incoming student that they’re going to have a first-class education and amazing experience.