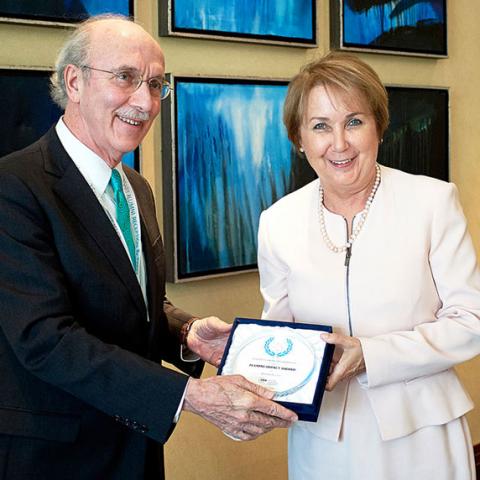 Borbála Czakó is a businesswoman and diplomat and proud CEU alumna from one of this University's first graduating classes. As Global Director and Partner at Ernst & Young she is responsible for regulations and government relations in 140 countries. In 2015 the Hungarian edition of Forbes magazine named her one of the 50 most-influential women in business in Hungary. A dedicated and generous supporter of her alma mater, in 2011 Borbala won CEU's 20th Anniversary Hero award.

After graduation, Borbala began her career at the World Bank, where she spent 10 years before leaving for Ernst & Young in Hungary, where she worked as Country Managing Partner. In 2006 she was appointed Hungarian Ambassador to the U.K., which she described as "probably the most complex and beautiful job" of her career.

Borbala is president of the Hungarian Business Leaders Forum, which initiated the 20-20 Klub, which seeks to increase the participation of women in Hungary's business leadership by 20 percent. She is an active and generous member of CEU's alumni community who organizes events, contributes generously to student scholarships and bolsters alumni involvement.