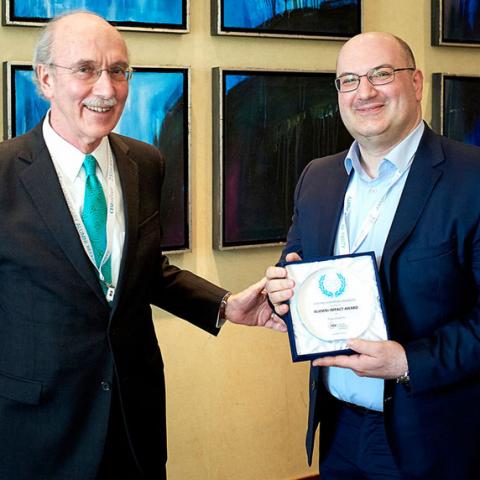 Giga Zedania is a philosopher with interests ranging from literature to politics, and with a passionate commitment to furthering the cause of open society in his native Georgia.

IN 2014, after having worked at different times for the Open Society Georgia foundation, as a TV host at the Georgian Public Broadcaster and as a coordinator of the Academic Swiss Caucasus Network, Giga was elected rector of Ilia State University, in Tbilisi, where he had been a professor since 2006.

Giga has been deeply involved with fashioning Ilia State University, one of the youngest, largest and most dynamic in its region, into a public forum for discussing critical social and cultural issues and where Georgia's European future is actively supported. He has previously served as the university's head of quality assurance, and dean of the Faculty of Humanities and as director for the Institute for Modernity Studies.

Giga received his MA degree in medieval studies in 2000 from CEU, where he learned not only Medieval Latin, but also the passion of thinking about the past in terms of the genealogy of the present – and where his vision of an open academic space, where knowledge and diversity are valued, was determined.

Giga also studied at Bard College (New York, USA) and University of Bochum (Germany), where he completed his PhD. He is the author of numerous publications in Georgian, English and German, among them on the history of philosophy, political theology and social theory. He is also blogger at Radio Liberty - Georgia.