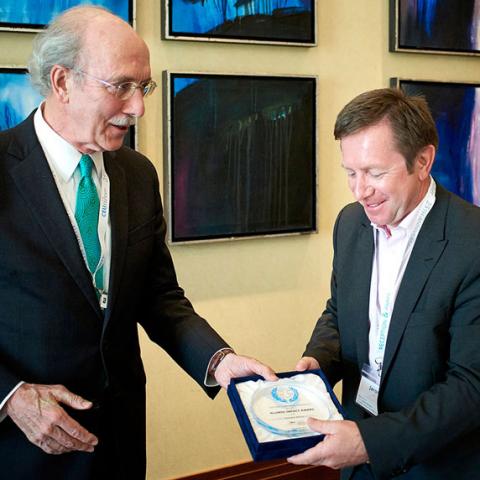 Jaroslav is a professor of History and the current President and Rector of Palacký University in Olomouc, Czech Republic.

His academic career includes serving as Director of the Historical Institute at Palacký University, as well as long-term research stays at ranking universities in Canada, the U.S., Germany, the United Kingdom and Australia. Jarolsav has twice been granted the prestigious Alexander von Humboldt Scholarship (2006, Marburg; 2010, Münster) and Andrew W. Mellon Scholarship (2004, 2010 Wolfenbüttel). In 2008 he received the Fulbright Fellowship at the University of Georgia, in the United States. During the 2010-11 academic year Jaroslav held a Go8 Guest Professorship at the University of Western Australia in Perth. Since 2012 he has also served as the Ambassador of the Fulbright Commission in the Czech Republic.

Jaroslav has also published extensively on urban and intellectual history. In 2008 his monograph Urban Societies in East Central Europe, 1500 – 1700 was published by Ashgate and earned him "The Best Urban History Monograph Award". Recently, together with CEU Professor and Pro-Rector for Social Sciences and Humanities & Hungarian Affairs Laszlo Kontler, he edited the book Friars, Nobles and Burghers – Sermons, Images and Prints: Studies of Culture and Society in Early-Modern Europe (CEU Press, 2010).

In addition to study at CEU, Jaroslav also studied History and Philology at Palacký University and Oxford. Among his tutors and teachers were noted academics, intellectuals and cutting-edge thinkers including Josef Jařab, Ralf Dahrendorf, Stephen Greenblatt and Robert J. W. Evans.

My long-term experience with CEU helped me substantially, and may justly be considered the milestone which predetermined not only my subsequent academic career, but also (perhaps more importantly) my personal life. Moreover, I may rely upon the growing network of CEU alumni. Many of these graduates became intellectual and political leaders in many (and especially in Central European) countries, and respected scholars in research institutions worldwide.

Jaroslav is married and has two children Jan, 12, and Barbora, 10.