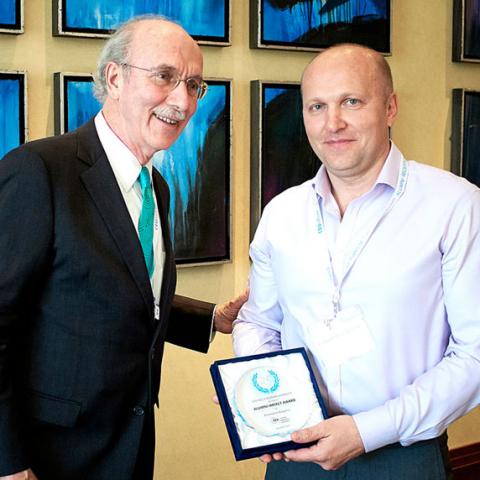 Konstantin is a businessman, owner of Peters & Burg Agrochemical Holding and proud CEU alumnus from Ukraine. He made CEU history in 2014, giving the largest ever single gift from a CEU graduate, to support the future of our university.  In his own words:

After graduation from the Business Stream of the CEU Department of Legal Studies, in 1994, I changed several jobs ranging from a governmental official to manager in a training company. Each time, after having settled at a new place I felt like I had to do something more.

Each time I sought the opportunity to do business on my own. I tried and failed several times. There were used scooters from Japan, high-end fashion garments from Italy, scientifically-sound electrical components from Ukraine, among many others.

As I lived through all of these experiences, rather than money what I gained was experience - and the stamina to endure failures. In 1999 I discovered agrochemicals, which became my most successful venture. After several years of exuberant growth, the business became more systematic, relying upon deliberate strategy rather than the fortunes of the market.

And it is time to learn again, to search through existing effective patterns of restructuring and developing of business. Meanwhile, the world (or at least a small part of it) experiences change where it was not expected, and here you are: new challenges to face and new opportunities to master.

And, as a manifestation of still being on the surface, there is a new academic year at CEU, with new students given a chance to enjoy this remarkable part of their lives.