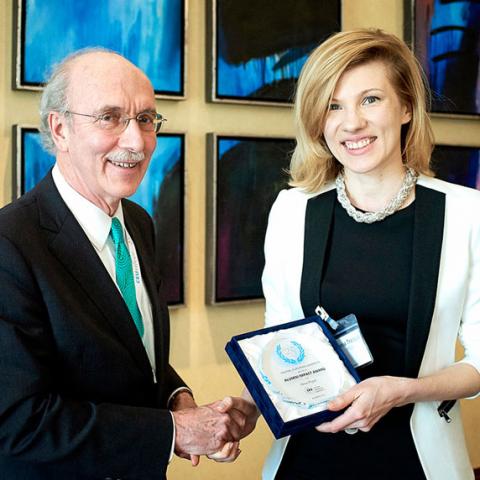 Olena is a media professional, educator and civic entrepreneur and current Director for International Assistance Coordination at Ukraine's Ministry of Economic Development and Trade, where she oversees a portfolio of more than $10 billion worth of international development projects.

Olena's transatlantic career, in the U.S., Ukraine and Poland, has immersed her in American and European values, cultures, business and politics.

In the U.S., Olena worked as an adjunct professor of political science at Adelphi University, as a media liaison at the U.N. in New York, and for several years was a U.S.-based correspondent for the Ukrainian News Agency, a columnist for the Kyiv Post, and a researcher on Ukraine for the New York Times. Her publications regarding Ukrainian domestic and international politics have appeared in a number of European and American media.

After 10 years in the U.S., Olena returned to Ukraine and joined the government to contribute to the post-Maidan transformation and to establish a demand-driven and transparent aid coordination system in Ukraine. In 2012, the World Economic Forum selected Olena to represent Ukraine as the Global Shaper during its Davos forum. She is also a member of Young Atlanticists' network of the Atlantic Council, which that brings together the next generation of leaders from the Transatlantic community.

Olena is a co-initiator and participant of various pro-democracy and pro-European civic initiatives in Ukraine, and a regular speaker at various international policy and academic forums. In addition to CEU, she is also a graduate of the Fletcher School of Law and Diplomacy at Tufts University and Kyiv-Mohyla University in Ukraine.