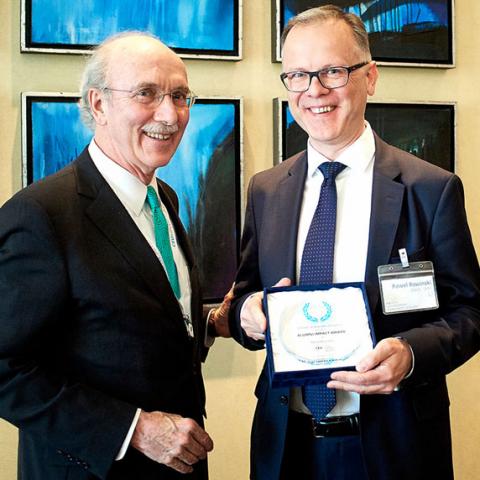 Paweł is a scientist and the Vice President of the Polish Academy of Sciences. Prior to his current position, from 2008 to 2015, he served as CEO of the academy's Institute of Geophysics, serving as its director from 2004 to 2008. In 2009 he was granted the title Professor of Earth Sciences by the President of Poland and the corresponding member of the academy.

Until May of 2015 Paweł also chaired the Board of Directors of the Earth and Planetary Research Centre (GeoPlanet) and as well as the council of provosts at Division III: Mathematics, Physics, Chemistry and Earth Sciences of the Polish Academy of Sciences.

He earned his M.S. degree in Mathematics from the University of Warsaw in 1988 before receiving a PhD in Earth Sciences in 1995 and his Habilitation in 2003 from the Institute of Geophysics, Polish Academy of Sciences.

Paweł's research interests include mathematical modelling of hydrological processes, fluvial hydraulics, river turbulence, pollution and sediment transport in rivers, among many others.

Paweł has published more than 130 times in scientific publications and prestigious journals, has co-authored and co-edited 14 scientific volumes, and has led and coordinated numerous national and international projects including those financed by the EU, US-AID in the Framework of US-Poland Technology Transfer Project, among many others. He served as Associate Editor of the Hydrological Sciences Journal (IAHS Press, Wallingford, UK) and is currently the Editor-in-Chief of the Monographic Series: Geoplanet: Earth and Planetary Sciences, Springer Verlag.

Paweł has earned a number of prestigious awards, is a member of numerous international and national bodies, and is an elected member of the Scientific Society of Warsaw, member of the Council for the Promotion of the Public Understanding of Science.