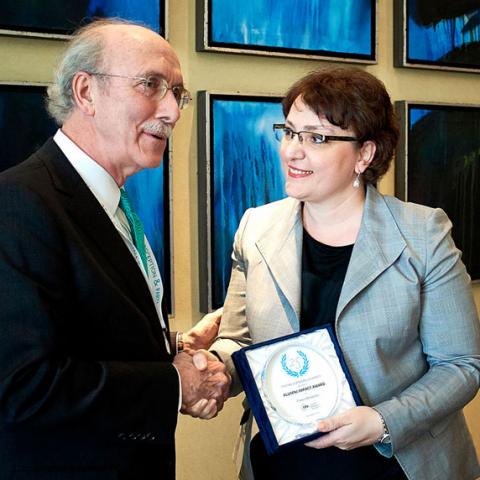 Alumna Tinatin Khidasheli is a politician and human rights advocate who had the distinction of serving as Georgia's first female Minister of Defense, from May 2015 to August 2016.

Having earned degrees from CEU and Tbilisi State University, plus having attended a one-year non-degree program at the Washington College of Law in Washington DC, she has held a number of posts in Georgian government, education and NGOs.

In the 1990s Tinatin worked on probation at the Georgian Ministry of Foreign Affairs, served as a specialist for inter-parliamentary relations on the staff of the Georgian Parliament, and later served as director of the First Free Legal Aid center in Georgia. After a stint teaching at Hawaii University Tbilisi Campus, she joined Georgia's National Anti-Corruption Council then becoming a Yale World Fellow in 2004, before chairing the Open Society Georgia Foundation, from 2004 to 2005.

From 2005 to 2009, after serving as an independent consultant on the rule of law, anticorruption and good governance, Tinatin served as a Secretary of International Affairs at the Republican Party of Georgia and was elected to the Party National Committee. In 2009 she took up the position of Secretary of Capital City Affairs.

In 2009 Tinatin co-authored the "August Ruins" report on human rights and humanitarian law violations during the 2008 Georgia-Russia War. She was also elected to the World Organization Against Torture's assembly of delegates, in Geneva, Switzerland, as a lead researcher on said war. She consults various local and international organizations on human rights, anti-corruption, transparency and related issues.

Since 1995 Tinatin has also been involved in peace talks and confidence-building activities related to the Georgian-Abkhaz conflict, and since 2004 has also served on the team of experts working on the European Neighborhood Policy document on behalf of Georgia.

In 2010 Tinatin was elected to the Tbilisi City Council and from 2012 to 2015 became a member of the Georgian Parliament and chair of the committee on European Integration. She was appointed as Georgian Minister of Defense in May of 2015, and is both the first CEU graduate and the first female to serve in that capacity.