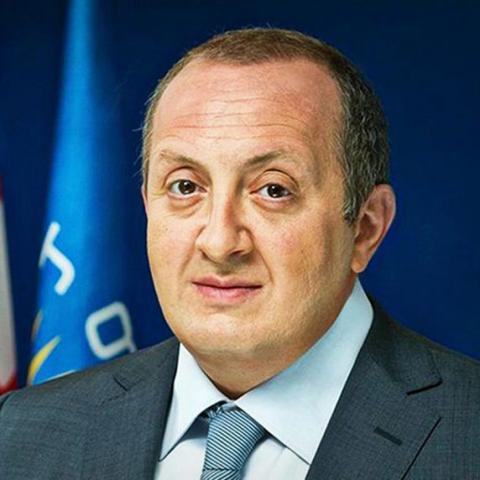 Former CEU student George Margvelashvili has served as President of Georgia since November 2013.

A former Deputy Prime Minister and Minister of Education and Science, George is a committed democrat and reformer who revitalized Georgia's education system after years of neglect. Although not affiliated with any political party, he was nominated as the governing Georgian Dream Coalition's presidential candidate, and was elected with more than 62 percent of the vote.

George's background is in public policy, politics and academia. Before joining the Georgian Dream government, he was a well-known political commentator and served for more than a decade in senior positions at the Georgian Institute of Public Affairs, a leading Georgian institution of higher education in government, law, international affairs and journalism.

He also held various research and teaching positions with Georgian Culture Research Center, Tbilisi Independent University, and from 2000 to 2012 served in various leadership roles at the Georgian Institute of Public Affairs, including stints as its provost and head of research department.

George became involved in Georgian politics prior to the November 2003 parliamentary elections, when he joined the opposition bloc led by former Prime Minister Zurab Zhvania. He was an outspoken critic of the government of Mikheil Saakashvili, which he viewed as corrupt and authoritarian. While remaining politically independent, he advised Mr. Ivanishvili during the Georgian Dream Coalition's campaign for the October 2012 parliamentary elections.

Following the Coalition's victory, George was appointed Minister of Education and Science. As Minister, his initiatives included raising teacher salaries, investing in school renovations and the provision of free school transportation. In February 2013, he was appointed First Deputy Prime Minister while continuing to fulfill his duties as Minister of Education and Science. He resigned from both positions to run in the October 2013 presidential elections.

George is married, with daughter, Ana, and young son Teimuraz. His wife, Maka, is an artist and actress. In his spare time, George enjoys hiking, tai chi, horseback riding, and spending time with friends at his country house.