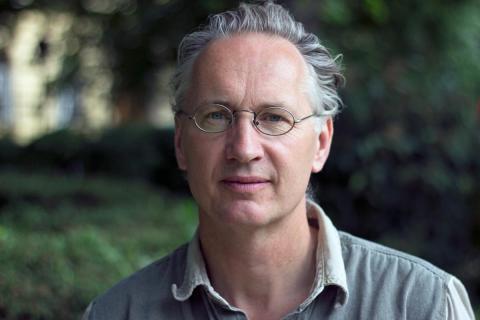 Alumnus Jaap Scholten (SOCL ’09, Netherlands) was 44 years old and an accomplished novelist when he began study at CEU. After graduating he converted his MA thesis, detailing the fate of Hungarian nobles under forced collectivization, into a prize-winning bestseller. Comrade Baron: A Journey through the Vanishing World of the Transylvanian Aristocracy was published in Dutch in 2010; an English version appeared three years later.

In 2011, Jaap hosted a documentary series for Dutch television about Central and Eastern Europe. His novels include Eighty, Morning Star, Spengler’s Law plus Jo Itt Nekem?!, based upon his time as a local correspondent for a Dutch newspaper. He has lived and worked in Budapest, with his Hungarian wife, since 2003.

What brought you to CEU?

I was already in Hungary. I like middle and Eastern Europe. I like the history, the chaos, the freedom and the nature. It’s much more unpredictable than life in the Netherlands, and I enjoy all of that. For me, as an author, it is so full of stories. In the Netherlands, with 500 years of peace, the most dramatic thing to most people is when the dog died.

I knew about CEU. It was two things: I wanted to collect the stories of this older generation [of Transylvanian nobles] and I thought it would be good to do that in an institute. And I had a desire to study. I knew CEU was an English language university, so it was ideal for me. It was a great experience. Although, nobody was as old as me. I was 44. I could be their father.

What is the most rewarding thing about your work?

In Comrade Baron it was beautiful to me that have had so many people to whom the book was or is important. It touched so many people who recognized their own destiny in that of the people in the book. I have had readings with grown men crying because it happened to them, or to their parents. That’s rewarding.

How did CEU help in your work?

The study of social anthropology helped me to look in another way at my work. Most of my books are about social classes and elites, I only didn’t realize. How can we structure it so we have a less worse elite? In CE and EE it’s only about connections, and not your merits and a lot of talent is wasted and people are frustrated. It helped me to look and have a set of tools to examine the elite in a less subjective way.

What do you feel is the value of CEU, its mission?

I think it’s essential for all the former communist countries to be in intense contact with the rest of the world. CEU is very important to bringing foreign people with great minds into the country. I think communism closed these countries quite a lot. If I were Hungary, I would be very happy with CEU.

I’m very Dutch. In the Netherlands we have a tradition of different parties having to work together. That’s in my DNA, that you work together.I think it’s healthy to have the voice of CEU in this country. To try to kill it, to me, shows poor sportsmanship. It would be a big loss to Budapest and to Hungary is the CEU could not stay here. I think it would be silly.

What would you say to new student?

If you see your future in this region, build a strong network here.

For more information on Jaap and his work, see comradebaron.com

Category:
In Their Own Words
Alumni
Alumni Stories