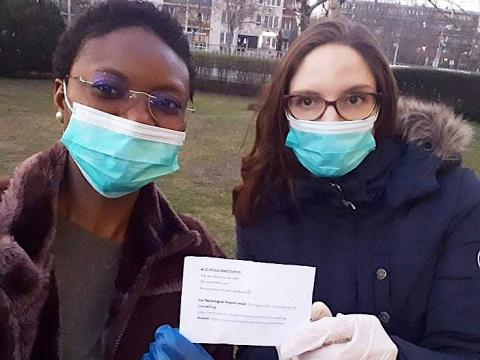 The notes appeared last month, slipped under students’ doors at the CEU Residence Center. On them were printed an email address, a website url, and a brief message:

The notes were the idea of Alumni Scholarship Recipient Esther Angonemi Ebimoghan (LEGS '20, Nigeria). She and fellow ASR Katerina Krejcova (LEGS '20, Czech Republic) are among a group of students who have stepped up to assist classmates struggling to complete their degrees while stuck in the dorm due to Covid-19.

They have helped by delivering meals to shut-in classmates and ensuring public areas have soap and disinfectant. Because the RC must now house only one student per room - roommates are no longer allowed - they have also gone door-to-door throughout the nine-storey building to help locate available vacancies.

During the search Esther noticed something: many anxious students, alone in their rooms and glued to the news.

“They looked distressed, they looked worried,” she said. “I came back to my room and couldn’t help but think about what I had seen. I thought ‘I have to do something about this.’”

She could relate. As the crisis intensified she too had found herself overwhelmed and depressed by the news. Now, spurred to action, she approached the university’s head psychologist with an idea.

Soon, fliers were printed up with the psychologist’s email, the mental services website and a message of encouragement. Then Esther and Katerina went again from the first to the ninth floor, slipping one of their notes under each of the RC’s 422 doors.

“We wanted to inform students that we care, that they’re okay and that CEU stands with them,” Esther said.

Last month CEU closed both its campuses and relocated Vienna-based students to Budapest, where many were quarantined at the RC. Hundreds more are sheltering there, maintaining social distancing and nervously monitoring the crisis.

Esther and Katerina say they want to reassure classmates, and let those who may be suffering know that help is available. They’re also fulfilling the community service requirements at the heart of the Alumni Scholarship they received this academic year.

“Having this scholarship means you’re supposed to give back,” Katerina said. “I like that I can, and that I still can do this while being in the RC.”

The ASRs say they’ll continue to help their fellow students. But now they’re asking alumni to get involved as well.

A new ‘thesis buddy’ program seeks alumni, particularly those working in academia, to help mentor and encourage students struggling to make headway on their final papers.

Esther and Katerina also say they hope alumni will simply reach out and send messages of support to students. These could be anything from notes of encouragement to personal stories of how alumni have overcome adversity.

“That would go a long way,” Esther said. “It’s a tough time right now. We need each other.”