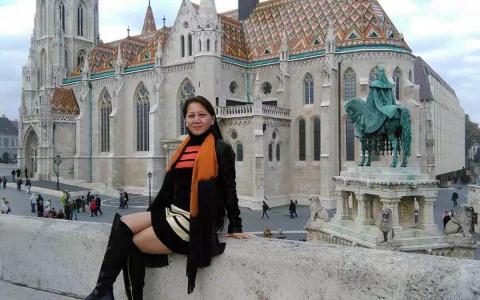 She reached out to her brother in China, a dealer in medical supplies. Soon, there was a carton of 4,000 masks in the post headed for Vienna – where Yan would donate them to CEU’s new campus. Yan offered to pay her brother for the masks. He didn’t accept.

It took weeks, but they finally arrived. That’s when things got difficult. There were papers to fill out, documentation to provide. Customs wanted to impose a duty, based on the masks’ market value. Yan explained she had no idea what they were worth. They were a gift, to be donated to her alma mater as safety equipment.

CEU got involved. But when the masks’ market value couldn’t be agreed upon - and no fee levied - customs eventually mailed them back to China. Yan was disappointed.

“I just wanted to donate them,” she said. “I’m not in the masks business.”

This wasn’t the first time Yan has stepped up to help CEU during a crisis.

A veteran of the U.S. Department of State and former office manager at the U.S. Embassy in Budapest, Yan helped organize crucial talks between CEU President and Rector Michael Ignatieff and Chargé d'Affaires David Kostelancik during the “Lex CEU” crisis of 2017.

Although the Hungarian parliament adopted the legislation that prompted CEU to move its American-accredited teaching to Vienna, Kostelancik and the State Department were proponents of CEU remaining in Budapest.

Yan has lived and worked in capitals around the world – including Budapest, Port of Spain, Abuja, Washington DC, Beijing, Luanda and Taipei. The wife of a U.S. diplomat and the mother of two children, she is currently stationed in Vienna where she works as an Office Management Specialist with the International Atomic Energy Agency of the State Department’s U.S. Mission to the International Organizations in Vienna.

This isn’t the first time Yan has volunteered for CEU in Vienna, either. Last fall, as the university opened its new campus there, she helped welcome new students and took them for walking tours around the city. She’s also helped recruit students for CEU’s EMBA program.

Yan said the gravity of the Covid-19 pandemic, and the hardship it has caused, prompted her to take action once again. Although the masks didn’t reach CEU, despite her efforts, she said it was still worthwhile. By helping, or at least trying to, in such difficult times, she was lifting herself as well.

“I want CEU to succeed,” she said. “When there’s a crisis we need to work together. And if each of us contributes, we’ll move forward.”

Want to get involved and volunteer for CEU? Get started here.