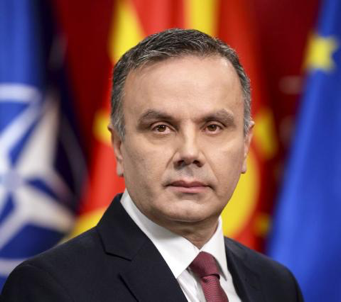 Zoran Dimitrovski (POLS ‘95, North Macedonia) still recalls the electricity of CEU’s early days. The Wall had collapsed, central and eastern Europe were opening in previously unthinkable ways, and the post-Cold War avantgarde, it seemed, had descended on Budapest to teach, to learn - and to apply those lessons going forward.

Zoran studied political science and embraced the vibrancy of student life at CEU and in Budapest. A budding journalist, he met and collaborated with fellow reporters from around the region. Returning home in 1995 he began a long career as a print journalist and (mostly) political editor for three daily newspapers (Nova Makedonija, Vecer and Dnevnik) and one weekly (Fokus).

Eventually, politics beckoned. In 2020 he was elected Secretary General of the Democratic Union. Soon after he was named North Macedonia’s Deputy Minister for Local Self-Government, tasked with overseeing decentralization and regional development throughout the country.

We caught up with Zoran to talk about work, the bane of fake news and the lasting impression of his CEU experience.

How does one go from journalism to government?

(Laughs) I haven’t said I’m done with journalism’ – you can never say that. I sometimes feel like I should ask the prime minister something as a journalist. But then I remind myself: ‘Forget it. You’re nowinthe government.’ Politics was always close to me, but now I see it from the other side. I don’t know if I’ll become a professional politician. But I think I can handle this job.

What’s the most compelling aspect of your work?

Empowering local municipalities. This is the European trend. And it’s a challenge for each and every government. What’s important: how to push the government, also foreign money, to invest in the regions which are underdeveloped. I’m very pleased to be doing this.

Will you stay in politics or hurry back to the newsroom?

I wouldn’t go back. The times have changed. After the fall of communism - in Budapest too - I was happy to be a journalist. But somehow, let’s say the last four or five years, it doesn’t have to do with who is in power. It has to do with world trends in journalism and things like fake news. The internet. Everybody became a ‘journalist’.

I’m a little upset about it. We were trained as professionals from the very beginning, even during the last years of communist times, to always search for the truth. But things changed. We see a lot of rumors and lies. Even mainstream media started broadcasting big lies. It’s a big problem. We have to do something to change this.

How did your CEU experience influence you and your work?

I was the first generation of political science students. It was 1993, very early in the transition to democracy in our country. We had the chance to learn from the

best professors in the region. World experts of this process of transition came to CEU to teach. Also, there were many people from eastern Europe there, journalists, sharing ideas.

These were very interesting times in Hungary, pluralistic times. It was the start of booming times for journalism, media. I learned many things that I implemented here in Skopje.

What do you miss most about those days?

For people coming from eastern Europe, even those of us from then Yugoslavia, acquainted with more liberal standards, it was amazing to meet with these leaders in the field. It’s one of the most important things I remember.