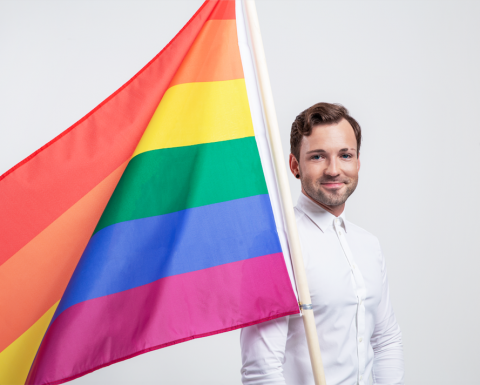 “It’s going to be Star Wars,” he said, laughing.

Slated for rollout in May, the legislation seeks legal recognition for same-sex families. Lithuania is currently one of only six EU countries with no such laws.

The effort has sparked backlash in parliament and on social media. Petitions demanding Tomas’s removal from the Human Rights Committee, which he chairs, have reportedly gathered more than 300,000 signatures. However, Tomas says he’s determined to see it through.

“Social change requires effort,” he said. “If I need to take some negative comments to make things better in the future, fine. Let’s do it. It’s part of my job and part of my mission. I’m ready.”

A graduate of the Human Rights program at CEU’s Department of Legal Studies, Tomas has been putting his ideas – and his legal instruction – into practice for years.

In 2019, after a stint in the ombudsperson's office, Tomas was elected to the Vilnius city council. The following year he was elected to parliament as a member of Lithuania’s Freedom Party, which advocates LGBT rights, drug decriminalization and other progressive causes.

Tomas made waves by campaigning in drag, and sometimes brandishing a geodesic-shaped unicorn’s head. Appearing this way – be it in Parliament or working class neighborhoods – was intended to challenge stereotypes and power dynamics, he said.

Tomas said such tactics also underscored his campaign message, that people should “be brave enough to live the way [they] want.”

Tomas said he and his colleagues’ work is driven partly in reaction to the crisis of liberal democracy and the rise of right-wing populism in nearby states.

Despite conservative backlash, Tomas said he senses a growing interest in progressive policies and issues long taboo in this eastern European country.

“There has been a value change in society,” he said.

But some Lithuanians, he said, still require convincing. The battle over the partnership bill, and Tomas’s committee chair, is likely to continue throughout 2021. Despite the challenges, Tomas says he’s ready – and that he draws on his time in Budapest for strength.