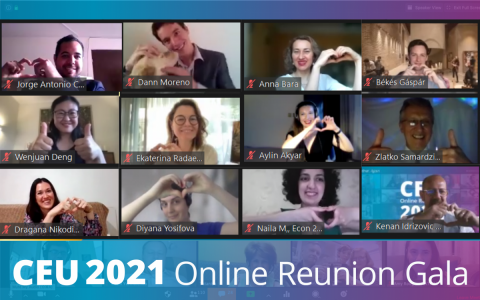 It was well past 2 a.m. local time, and Anna Firsova (ENVS ‘03) was still awake and on Zoom, dressed for a party.

She wasn’t alone. Dozens of her friends and classmates were also online with her, logged in simultaneously from across the globe. Brought together by an idea, and a shared experience.

They were among the more than 120 alumni who joined CEU 2021 Online Reunion Gala on Friday, June 11. It was CEU’s second online reunion of the Covid era, and the depth of feeling and community spirit was unmistakable.

Eager to reconnect, attendees shared stories about their lives, their work, their children. Stories about how this university shaped who they are today, and how their fellow alumni appear in their lives, often when least expected.

“These are people who are on the same wave, they’re everywhere,” alumna Lilya Berezhnaya (HIST ’96) said during the gathering. “This is a heritage we have to promote further.”

“This is a network”

President and Rector Michael Ignatieff, in his final appearance at an alumni event, spoke of CEU’s recent difficulties and its new beginnings in Vienna. He urged alumni to consider their impact on not only the life of the university, but each other.

“This is a network,” he said. “In a world of fanaticism and hatred, we’ve created a community of 18,000 people around the world based on an experience … you owe as much to each other as you do to this institution.”

Gaspar Bekes (ENVS ‘17) recalled his studies during the LexCEU era, and his work on the Szabad Egyetem (“Free University”) Movement.

“It was the community spirit that motivated us,” he said. “We did what we could.”

Ekaterina Radaeva (LEGS ‘97), CEU Alumni Chapter Leader in the Czech Republic, also spoke of her student days. From seeing former Rector Yehuda Elkana distributing flowers, to mingling with intellectuals from around the world, CEU differed wildly from what she’d experienced back home.
“CEU increased our level,” she said.

The Gala was part of this year's alumni reunion week. Due to Covid restrictions, CEU alumni haven’t met for an in-person reunion gala since May 2019 in Budapest.

As per tradition, this year’s gala was hosted by CEU Vice President of Enrollment, Careers and Alumni Relations Serge Sych (IRES ’97, LEGS ’99, Ukraine) who also moderated the traditional Q&A and networking sessions.

New traditions continued this year as well, including the popular ‘Quarantine Playlist’ of alumni-chosen songs, remixed with gusto by DJ Kekel - aka alumnus Zlatko Samardziev (ENVS ‘94).

Despite another difficult year of lockdowns and partial lockdowns – and near universal ‘Zoom fatigue’ – this year’s gala demonstrated that the desire to reconnect is alive and well with CEU alumni.

With mini class reunions still going strong, and DJ Kekel rocking the decks, gala continued after its official end time, long after Anna and others had signed off for the night.

THANK YOU to all our fellow CEU Alumni and Friends who joined us for CEU 2021 Online Reunion!