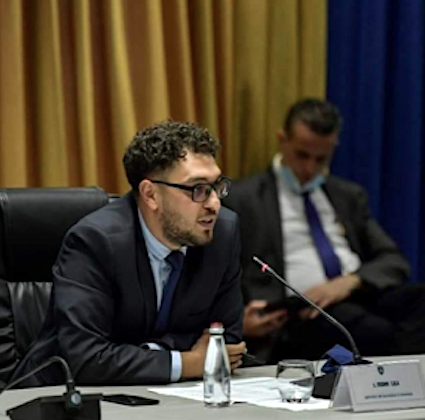 CEU alumnus Fridon Lala (SPP ’19, Kosovo) was recently elected as a Member of Parliament in Kosovo and has begun his four-year term.

Elected during the country’s fifth election since independence, Fridon said his top priorities as an MP are to promote the rights and interests of vulnerable groups and youth.

“I took the seat at the time when the country was hit hard by Covid 19, and in need of economic recovery,” he said. “Being elected at this young age enables me to bring new perspectives and solutions to Kosovo’s complex problems.”

Elected at age 29, Fridon, a member of Kosovo’s New Democratic Initiative party, is among the youngest of Kosovo’s political leadership.

Formerly Kosovo’s Deputy Minister of Regional Development, Fridon also sits on numerous parliamentary committees, acting as a deputy chairman of the Committee on European Integration, and a member of the Committee on Rights and Interests of Communities and Returns, and the Oversight Committee for Kosovo Intelligence Agency.