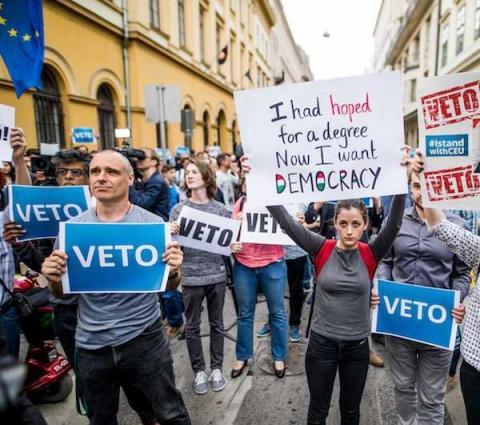 CEU alumni and friends in Budapest and beyond continue to say #istandwithCEU in opposition to the Hungarian government's attempts to shut it down.

Alumni were among those attending a thousands-strong grassroots demonstration—the second in Budapest less than a week—that occurred outside campus on Tuesday in opposition to legislation targeting CEU.

Alumni and friends have also continued to demonstrate in support of CEU in cities across Europe, including Vienna, Zagreb, Tbilisi and Bucharest among others, following previously-reported actions in London, Berlin, Vinius and elsewhere.

These events, often held outside of Hungarian consulates, demand academic freedom for CEU, and all other institutions in Hungary, and withdrawal of the legislation, dubbed 'Lex CEU.'

Alumni have also gotten involved by signing petitions, contacting their elected representatives and sending letters of solidarity to Hungarian President Dr. János Áder, urging him to not sign the law. Others have taken to social media to help organize campaigns in support of CEU's academic freedom.

All of this is testimonial to CEU and the amazing, dedicated people who comprise its alumni community. THANK YOU to all alumni and friends who have gotten involved to stand with your university!

***
Are you doing something to support CEU? Please tell us what, and why you do it. (Also, be sure to fill out the consent form and be sure to include your school/department, graduation year and valid email address.)

For the latest, join the main CEU Alumni Facebook group and also get the latest and take action at the #istandwithCEU webpage and hashtag on social media.